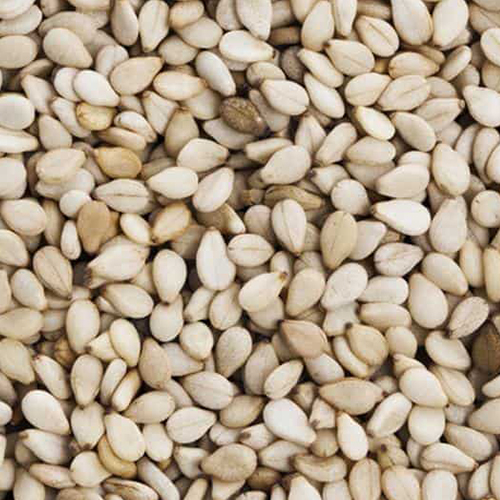 Sesame is one of the oldest cultivated plants in the world. It was a highly prized crop of Babylon and Assyria at least 4,000 years ago. Today India is the worlds largest producers of sesame followed by Burma, Sudan, Mexico, Nigeria, Venezuela, Turkey, Uganda, China and Ethiopia. Sesame was introduced to the United states in the 1930’s. Domestic production has been limited because of lack of cultivators that can be harvested mechanically. In 1987, the sesame average in this country was less than 2500 acres, about half of which were in Texas. The U.S. Imports about 40,000 tons of seed and 2,200 tons of sesame seed annually.

Natural White Seeds are tiny, flat oval seeds with a nutty taste and a slight crunch. Sesame seeds (approximately 50% oil and 25% protein) are used in bakery and confectionary, candy making and other food industries. Oil from the seed is used in cooking, salad oils, margarine and contains about 47% oleic acid and 39 linoleic acid. Foods fried in sesame oil have a log shelf life because the oil contains a antioxidant called “sesamol”. The oil can be used in the manufacture of soaps, paints, perfumes, pharmaceuticals and insecticides